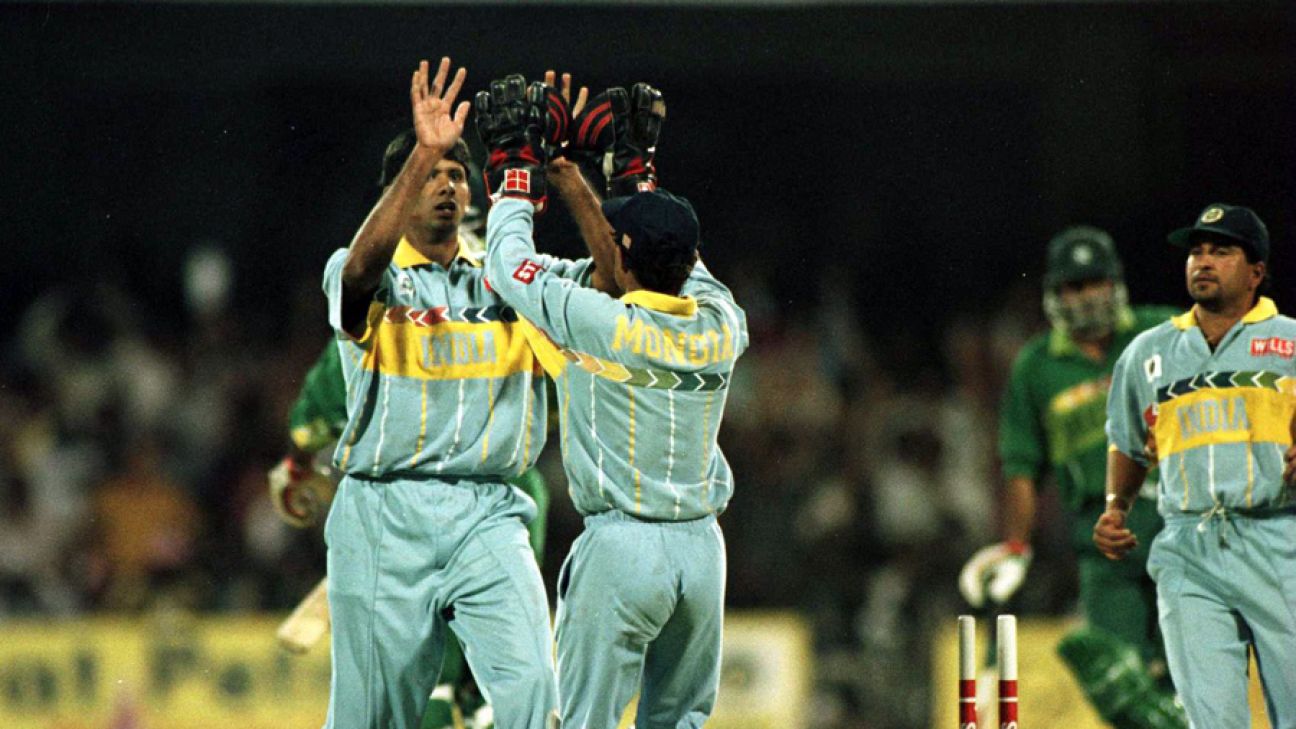 Pakistans reign as World Champions has come to an end at the hands of their bitterest rivals, after the most richly anticipated clash of the 1996 World Cup served up a seething, bare-knuckle confrontation under the Chinnaswamy floodlights.

The margin, 39 runs, looked substantial by the time the last rites of the contest had been played out, in front of a deliriously satisfied crowd of 35,000 partisan fans who - with whistles, hoots and bonfires in the stands - belied Bangalores previously staid reputation in an atmosphere that teetered at times towards anarchy.

But the agonies that those fans endured in the course of the contest were real - as were those of countless millions from Karachi to Calcutta as the subcontinent came to a standstill for one pulsating evening. And never was the fate of the protagonists more on a knife-edge than during a thrilling opening stand of 84 in ten overs between Aamer Sohail and Saeed Anwar, one that appeared to have placed a daunting target of 288 well within Pakistans grasp.

And yet, in the final analysis, India found the right men for the key moments, as they turned the tables in the middle overs and held their nerve at the death. Their basic team discipline was allied to top-notes of adrenalin-fuelled inspiration - not least a ballistic late onslaught from Ajay Jadeja - as they found the means to outlast a worthy opponent. Fittingly, and poignantly, it was Javed Miandad, 38 years old, and playing in his sixth World Cup after nearly three years of self-declared exile, who was on deck as Pakistans hopes faded to black. He bulwarked the closing overs before being run out for 38 from 64 balls, as the mounting asking-rate enveloped his dreams of one final glory.

Pakistan will rue their fate in this contest for many years to come - they have never yet beaten India in a World Cup contest in 21 years of trying, and rarely can they have had a contest more at their mercy. But rushes of blood littered their strokeplay as the game slipped from their grasp, not least the wild hack that Aamer, standing in as captain after the grievous pre-toss loss of Wasim Akram to a side strain, aimed at a pumped-up Venkatesh Prasad to eject himself from the contest at precisely the moment when consolidation was Pakistans watchword.

Prasads send-off to Aamer was as feisty and uncomplicated as his subsequent command of the legcutter proved cool and calculating, and Pakistans middle order struggled to hit the ground running. Ijaz Ahmed opted to counter his threat with muscle but hoisted a leading edge to cover; Inzamam-ul-Haq attempted finesse, but steered a flat-footed poke to Nayan Mongia behind the stumps. And at 132 for 4, what embers remained of Pakistans fight were duly doused by the spinners, Anil Kumble and Venkatapathy Raju, who throttled the contest with four wickets between them, and ensured that Indias lack of a fifth specialist bowler would not prove costly.

It has been a slow burn of a World Cup, with mismatches and cancellations dominating an over-long group stage, in which the only real jeopardy for the senior Test nations has been the identity and venue of these knock-outs. And after squandering their chance of a home tie in Karachi with last weeks untimely loss to South Africa, Pakistans plans took a further hit in the build-up, with Wasims absence compounded by the loss of an important toss which left them the unenviable task of chasing in Bangalores floodlit debut.

That prospect perhaps informed the tempo of the games opening exchanges, as Pakistan shelved their habitual aggression with the new ball and veered very early towards containment. Navjot Sidhu responded with a maturely compiled 93 from 115 balls, an innings in which he outscored his more illustrious partner Sachin Tendulkar by almost 2 to 1 in an opening stand of 90. But at 237 for 6 after 47 overs, Indias innings was in danger of drifting towards mediocrity.

Until, that is, an astonishing late onslaught from Jadeja, whose natural attributes of strength and timing surged to the fore to eviscerate Pakistans death bowlers. No-one suffered more gruesomely than Waqar Younis, whose first eight overs had yielded 27 runs, but whose final two were smashed for 22 and 18 respectively - or dis-respectfully, you might say.

Up until that moment, Pakistan seemed to have been earning their rewards for perseverance. At 168 for 2, Mushtaq Ahmed - a key player in the 1992 triumph - dislodged Sidhu with the flipper when a century was there for the taking, then followed up with a masterfully disguised googly to bowl Vinod Kambli on the charge for 24. Mohammad Azharuddin had already gone by then, supremely snaffled by Rashid Latif to give Waqar the wicket that his endeavours had earned, and when Mongia was run out for 3, a total of 250 seemed the upper limit of their ambitions and the Chinnaswamy was taut with apprehension.

And yet, Jadejas part in that run-out seemed to click him into instant overdrive. Having survived a screechingly close lbw appeal from his first ball against Waqar, he decided thereafter not to let his legs be a target as he carved repeatedly and violently through the line and across the ropes.

From consecutive Waqar deliveries Jadeja creamed four, six, four, six - the best of the lot an insolent slog over wide long-off as he seized on a fractional erring in line with disdain, and when Aaqib Javed banged one in short in between whiles, he slapped a further four off his eyebrows to send the whole of his country into raptures.

By the time he holed out to long-on to end Waqars torment, Jadeja had racked up 45 from 25 balls, and with Kumble chiming in as well, India helped themselves to 50 runs in three overs that seemed, surely, to have put the game beyond reach.

But Pakistan werent to be beaten quite that easily, and in scenes as eerily silent as a Hitchcock thriller, Aamer and Anwar made it their business to tear chunks out of the target in an opening salvo so calm and calculating it seemed to pan out in slow motion.

Javagal Srinath was bunted over midwicket by Aamer in his first over, before Anwar opened his nights work with back-to-back boundaries off Prasad, including a cover drive so pre-meditated, he might as well as started playing it on the flight over the border.

The hits just kept on coming, so much so that Azharuddin turned to Kumble as early as the fifth over, but even he found himself soaring into the stands at long-on as Anwar kept his foot to the floor. And when Srinath was plucked off the toes high over midwicket for Anwars second six of the night, there seemed no earthly means of pulling Indias bowling effort out of its nose-dive.

But then Pakistan blinked fatefully, and their reign as World Champions began to unravel.