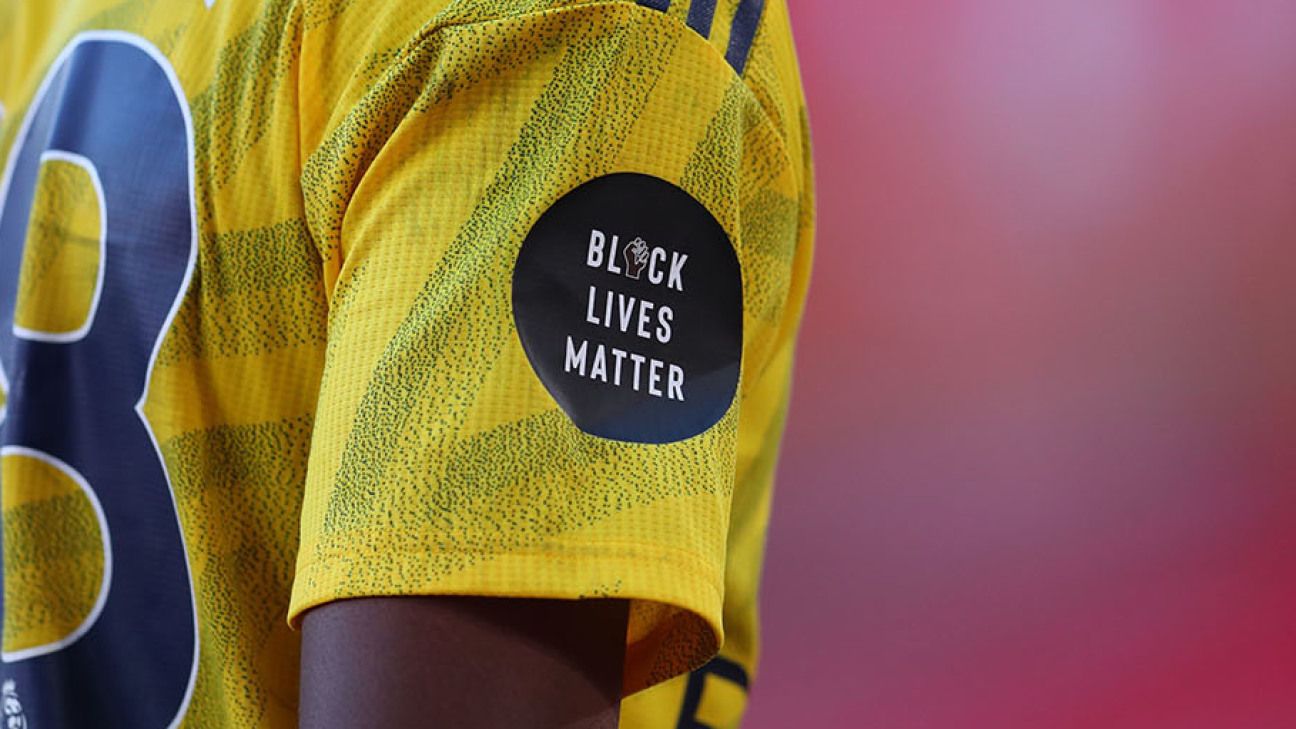 West Indies will wear a Black Lives Matter emblem on the collars of their shirts during Julys Test series against England.

Captain Jason Holder hinted in his first press conference of the tour that West Indies would look to support the movement in some way, and said in a statement on Sunday: "We believe we have a duty to show solidarity and also to help raise awareness."

The logo used will be that worn on the shirts of all 20 Premier League football clubs since the sports restart earlier this month, designed by Alisha Hosannah, whose partner Troy Deeney is Watfords captain. Deeney was contacted by CWI for approval, and the ICC gave permission for the emblem to be worn on the teams collars.

"This is a pivotal moment in history for sports, for the game of cricket and for the West Indies cricket team," Holder said. "We have come to England to retain the Wisden Trophy but we are very conscious of happenings around the world and the fight for justice and equality.

"As a group of young men, we know of the rich and diverse history of West Indies cricket and we know we are guardians of the great game for generation to come.

"We did not take our decision lightly. We know what it is for people to make judgments because of the colour of our skin, so we know what it feels like, this goes beyond the boundary. There must be equality and there must be unity. Until we get that as people, we cannot stop.

"We have to find some way to have equal rights and people must not be viewed differently because of the colour of their skin or ethnic background."

Deeney said: "Alisha and I are immensely proud to be asked and take part in a monumental moment in world sport, this amazing decision by the West Indies cricket team to show their support for Black Lives Matter.

"Watching cricket with my grandad, and seeing Brian Lara transcend from being a cricketer to a worldwide superstar, shaped my childhood, so its great to be able to help West Indies cricket show their support in such a meaningful way."

The shirts are expected to be worn for the first time in this weeks first-class, four-day warm-up match at Emirates Old Trafford, which starts on Monday.

The ICC had previously told ESPNcricinfo that they would operate a "common-sense approach to the implementation of regulations" regarding demonstrations of solidarity with the movement, which would be assessed on a "case-by-case basis".

England are also expected to mark their support for the movement during the series following discussions within the squad, and may also wear blue armbands in recognition of the contribution of NHS staff during the Covid-19 pandemic. The ECB announced last week that players would wear the names of cricket-supporting key workers on their training shirts ahead of the first Test.

West Indies shirts will also be the first to feature a chest sponsor, like those seen in football since the 1970s. The ICCs chief executives committee ratified a change earlier this month to allow a relaxation of rules on apparel logos for the next 12 months, seemingly to help them maintain relations with sponsors during a difficult financial period.

Logos on the fronts of players shirts will not be permitted to exceed 32 square inches in size, as per the regulations for ODI and T20I kits. England are also expected to release a shirt with a chest sponsor in the next few days.